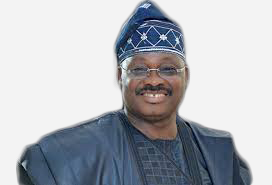 Born to the renowned Ajimobi family of Ibadan on the 16th of December ,1949

He was the table tennis captain,football captain and the game prefect .In athletic , he was the second fastest student manning the 1st leg for relay race and number two in 100and 200 meters race .As a result of his all-rounder image ,he was nicknamed ARCHIPELAGO.

He completed his secondary school education in flying colors .He later preceded to the United State of America where he attended the state University New York ,in Buffalo, New York and the Governor’s State University ,Park Forest, IIinose.He graduated with B.SC(Honors) in Business Administration and Finance .He also obtained his Masters of Science (MBA) degree in Operation  Research and Marketing .

As a result of his academic credentials and excellent performance at the New York Insurance examination ,he was engaged as the 1st Nigerian state certified underwriter by Equitable Life Assurance Corporation, which was the 2nd largest Insurance company in America . Abiola Adeyemi Ajimobi returned to Nigeria in 1977 and joined a Management and Industrial consulting firm as a Senior Consultant .

He thereafter worked briefly with Modulor Group as the Finance and Admin  Controller before joining  Nestle Foods PLC  as the Operation Controller and later as Marketing  Controller .In 1979 Abiola joined National Oil and Chemical Marketing Company as the Consumer product Manager .He was the youngest Manager to occupy such a sensitive position .

His performance quickly earned him promotion to the level of Divisional Manager within one and a half years .Thus becoming the youngest Divisional Manager to be appointed. For his star performance ,strategic business application , helicopter views and visibility in the company he was promoted quickly again above his peers to head a newly created corporate credit division reporting directly to the Managing Director .His successful performance made the division a Cynosure of all eye s in the company .As a top  flyer in the company and based on his problem solving ability he was deployed to Ibadan Business District  as the Area  Manager to ensure the repositioning of the entire company activity in the area .

In 1993 , Abiola Ajimobi has had successful and broad exposure in virtually all the marketing  arms of the company and obviously destined for the top . As part of the grooming programs he was posted on international assignment to Shell International storage company of Togo , serving the whole West Africa as Chief Executive .He also was the operation Director of Shell Marketing Company  in Togo covering some West Africa countries.

He returned to Nigeria in 1995and was appointed in 1996 as oil sales  Manager .In 1998 he was appointed to the board of the company as Executive Director –Marketing , a position he held before his appointment on February 2001 , as the Managing Director /Chief Executive Officer of the national oil and Chemical Marketing company . As Managing Director he substantially improved the profitability of the company and the shareholder fortune. In 2003 he voluntarily retires after 26 years of meritorious service in the oil industry.

In his successful professional career spanning a period of over three decade , Abiola Ajimobi was smart , brilliant ,quick witted , and positively impacted on the business and people he interacted with .

In 2003 he became a senator of the Republic of Nigeria .He was a principle officer as the Deputy Minority leader of the senate.

During his senate days, precisely in 2005, he established the first and the largest FREE VOCATIONAL TRAINING CENTER ,in Oyo state , offering training In computer engineering ,computer operation , telephone  engineering , fashion designing , hair dressing , tie and dye  etc. The center has turned out over 15,000 student to date that have gained employment In banks and many  industries in Nigeria . The center has been recognize and certified both as a partner and training center by the ITF of Federal Government.

In 2007 he contested and believed to have won the Gubernatorial election under the umbrella of ANPP but like most of his peers in the opposition parties he was denied his mandate. As characteristic of him , he leave everything to God but never gives up his desire to serve “Those who are too traditional cannot be transitional and those  who cannot embrace change cannot be in charge .Leadership is not about being nice, it is about being right and being strong”

Senator Abiola Ajimobi has been strong in spite of all opposing circumstance, no wonder his achievements have been phenomenal.

Some of them are:

Recently contracts for the dualisation of some other major roads within Ibadan metropolis was awarded.

These and many more achievements have been recorded during the tenure of Senator Abiola Ajimobi. Perhaps a landmark achievement is his victory in the 2015 elections making him the first Governor in Oyo State to win two consecutive governorship elections.

His journey so far and these landmark achievements have been humbly supported by his MASTER PIECE OF NATURE of over 37 years, Mrs. Florence Ajimobi and his lovely children.