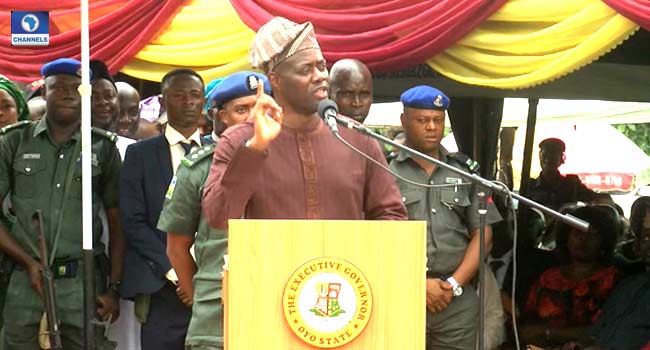 Speaking at the flag off ceremony, the governor said that the dualisation and rehabilitation of the road became necessary in order to ensure the sustainability of the Airport.

In his words: “For this Airport to be sustainable, a plane must be landing every 30 minutes. If we have to achieve that, there are certain people we have to attract to the Airport. Once we are able to attract these people, if there is a bottleneck to get into the airport, it will affect the competitiveness of the airport.

“So, I took the decision that we will go ahead under the watch of this administration to dualise the Ibadan Airport road.”

He further noted that the dualisation of the Airport road will have immense benefits to the state as the project includes the rehabilitation of important road networks in the state.

The Governor said, “The dualisation of this Ibadan Airport road will come with immense economic benefits especially because we are not building this 2.3km road in isolation. This contract also includes the rehabilitation/reconstruction of the adjourning access roads along the Airport axis. In total, the work scope for this project is about 10.8km as the project includes the rehabilitation of spur roads along Iwo road interchange to Adegbayi road and the road to Bishop Philips academy.

“Similarly, we have awarded the contract of aviation fuel storage and dispensing facility so that aircrafts can sleep overnight in Ibadan and fuel their planes.

What we are doing here is engineering a modern Oyo state. The architects only make models, we engineers build structures and systems that will lead to sustainable development in Oyo state and that is what we are doing.

“The previous administration awarded the expansion of the shoulder of this road from Onipepeye for 200 million naira. After 6 weeks of deliberation, we decided to award the reconstruction of this road to Messrs Kopek Construction Limited for the sum of N4,998,939,148.08.

“The construction company has promised us that the project will be delivered in 6 months”, he added.

Governor Makinde further stated that at the completion of the Airport road, it would be renamed Omololu Olunloyo Road after the former Governor of Oyo State, Dr Omololu Olunloyo.